Now that we are well into the 2012 EA Sports NCAA Football (PS3 version) season, lets take a look at the starters and the Head Coach and Director of Football Operations.

Your Owls are loaded with seniors this season.  This could be bad news for 2013.  The brightest spot is freshman running back Marlon Givens.  He has played well averaging a bit over 100 yards per game and he has been on and off the Heisman watch radar.  He has a promising future.

The defense has a bit more class balance.  Leading the way are CB Aaron Meade with 4 picks, LB Dwane Rawls with 38 tackles and DT Andrew Brown with 10 sacks.  They give up lots of yards but have been very good in the red zone.

All I can say about these guys is that they stink, bless their hearts.  With weak legs and poor accuracy they can not be relied upon in clutch situations. 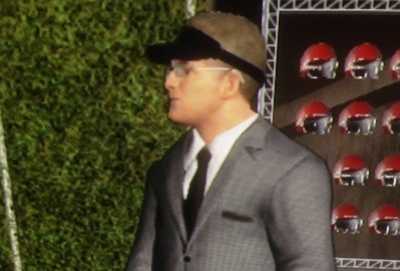 Head Coach (and Director of Football Operations) Gomer S. Blake has had a long and storied coaching career.  Unfortunately, many of those stories had unhappy endings.  2012 has been by far his most successful season in his tenure with your Florida Atlantic Owls.

This entry was posted in Fantasy, Sports. Bookmark the permalink.