Mow Mow is no longer with us :( 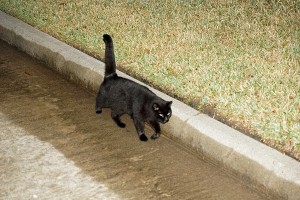 Back in 2012 I posted some photos of the various Christmas decorations around the neighborhood. It included this photo at the left of our neighborhood stray cat, Mow Mow.

I regret to report that as of July 3, 2017 Mow Mow is no longer with us. We will miss her but she is probably in a better place.

Not long after I posted that photograph our next door neighbor took her in and started caring for her. She still patrolled the neighborhood broadcasting her presence with a distinctive MOW!

She once took a little vacation. On July 5, 2015 Mow Mow was noticed missing. Nobody had a clue where she went. She showed up again in early August, completely healthy and apparently well fed. I suspect that she was frightened by fireworks and fled to escape the din.

No, she is not dead. She is gone because that neighbor moved away and took Mow Mow with them. The reason I mentioned she is probably in a better place is that there were a couple of other cats roaming the neighborhood that she would have an occasional argument with.