As I mentioned, last week while I was surfing the net and googling one of the bunny trails led me to this file that originated on the Gerald Ford Library site.

This file is a pdf of various letters and 4 FYI issues from 1974-75. This was around the time that I joined MWK as a fresh out of college Associate Engineer in Project Systems.

Use this link to view or download this wonderful document.

This file is text searchable; you can search (use the icon or a ctrl-f) for names, projects, or any other word of interest.

Please note that this file is very large (66 meg), so be patient as it loads. You may not want to do this on a phone if you are paying data fees.

Well it has been a while, about 7 months in fact, since I made my last post here. It’s about time I got off my butt, or maybe put my butt in the chair in front of my ‘puter and write something that just might win me a Pulitzer. I have been thinking about writing about “That 2-Drawer File Cabinet”. Like I said, it’s about time, so here goes.

During the first 2 years of my tenure at WRPI, the station was co-located with The RPI Players in a building called “Lounge 15”. No kidding, the mailing address at the time for the radio station was: WRPI, Lounge 15, Troy, NY, 12180.

The WRPI news room was in a very small room next to the music library. The room contained a desk and chair, an Uher Portable Tape Recorder, a microphone connected to the recorder, a Bearcat scanner, and That 2-Drawer File Cabinet.

The bottom drawer of That 2-Drawer File Cabinet was stuffed with a bunch of  45 RPM records! They were all pretty dusty and few were in their sleeves. Who knows how long they might have been entombed there. As you would expect, most were scratched up badly.

In that bunch I found a few gems:

First off, there was Al Caiola’s recording of “The Magnificent Seven”

I dusted it off and found that it was in good shape. I started using it as background music during my show on WRPI. One afternoon during my show I got a phone call from an idiot who said he was going to file a complaint with the FCC for airing a Marlboro commercial. Crikey!

Next was Link Wray‘s “Rumble”.

It was in good enough shape that I played it a few times on WRPI. It didn’t get any complaints. It also didn’t generate any kudos. So, I guess the audience thought little of it. I had never heard it before and I thought and still do think it is a very cool tune.

The history on this song, according to informed sources, is that while Link and his Ray Men were playing a dance someone in attendance asked for the band to play a stroll. They didn’t know any so they improvised “Rumble”.

Last but not least there was a record loaded with short promotions by various 1960s pop stars for Coca Cola. I don’t have any idea what they used for. They are too long to be used as commercials.

I found a few on line and have posted them here:

That’s all for now. Have a nice day!

A Short Break from Work

I have taken a week off from work just to relax and enjoy our wonderful Houston summer weather. On Friday, we took a short trip to Palestine[1], via Crockett.

I wanted to take a slew of pictures, but my Sony Alpha 77 had a dead battery. So, I made do with the phone camera and a little Photoshoppery for this little display.

Here is a shot of beautiful, downtown Crockett. 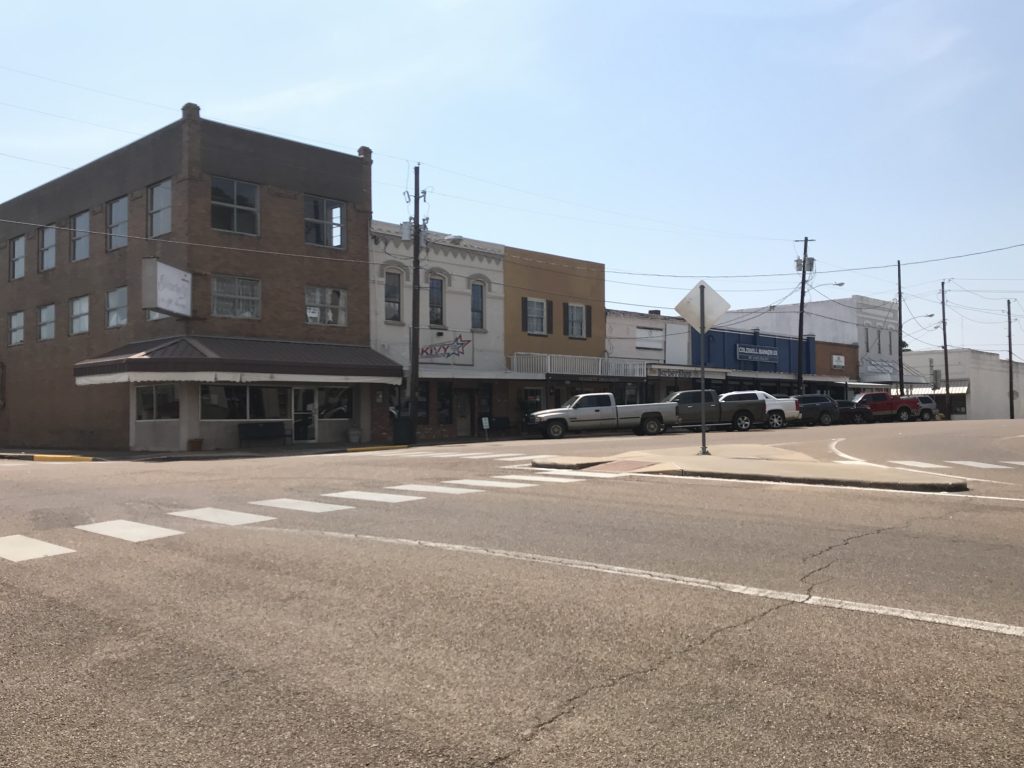 We had lunch here at the Moosehead Café. It is a quaint but large place with seating for about 50 and tons of antiques. They even have some old 8 Tracks. 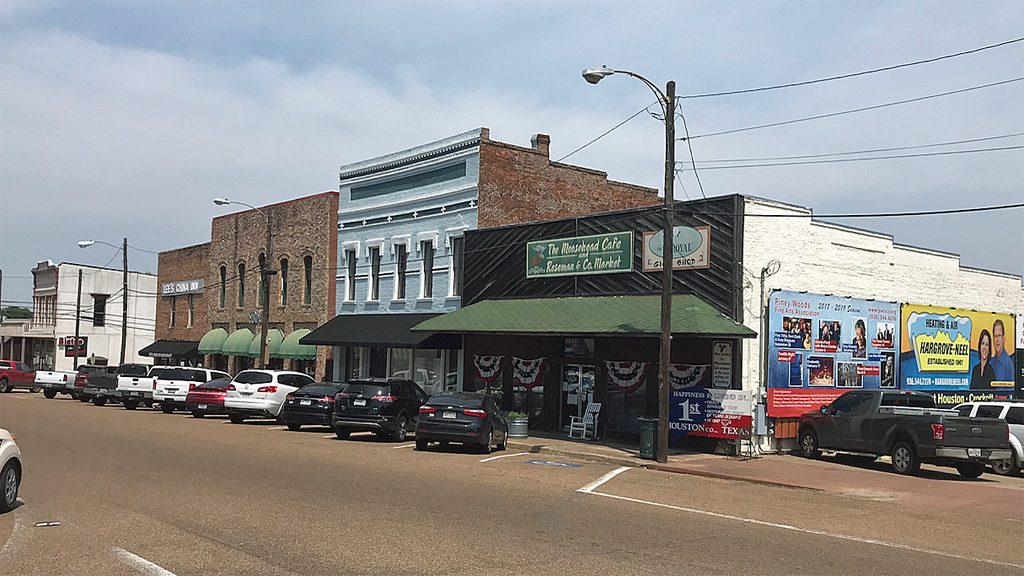 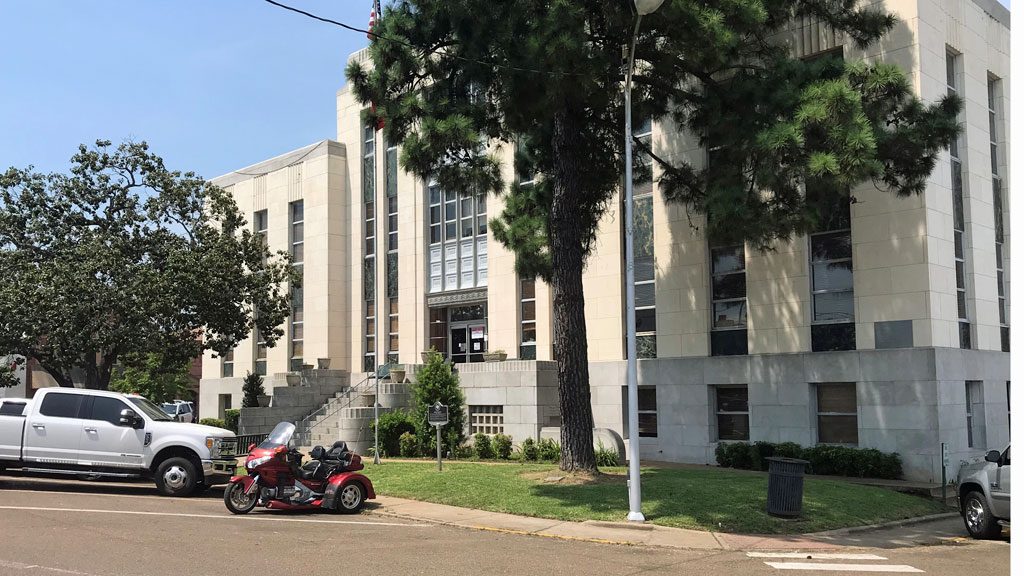 I didn’t see anything named after dear old Davey except this drug store. 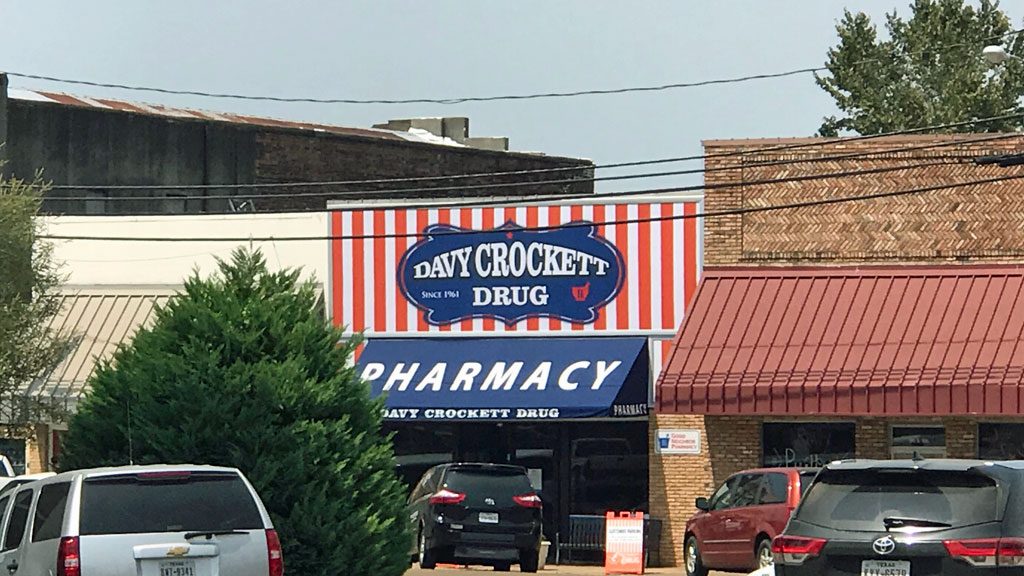 The Last Picture Show: They must have put on the Ritz here every Saturday night. 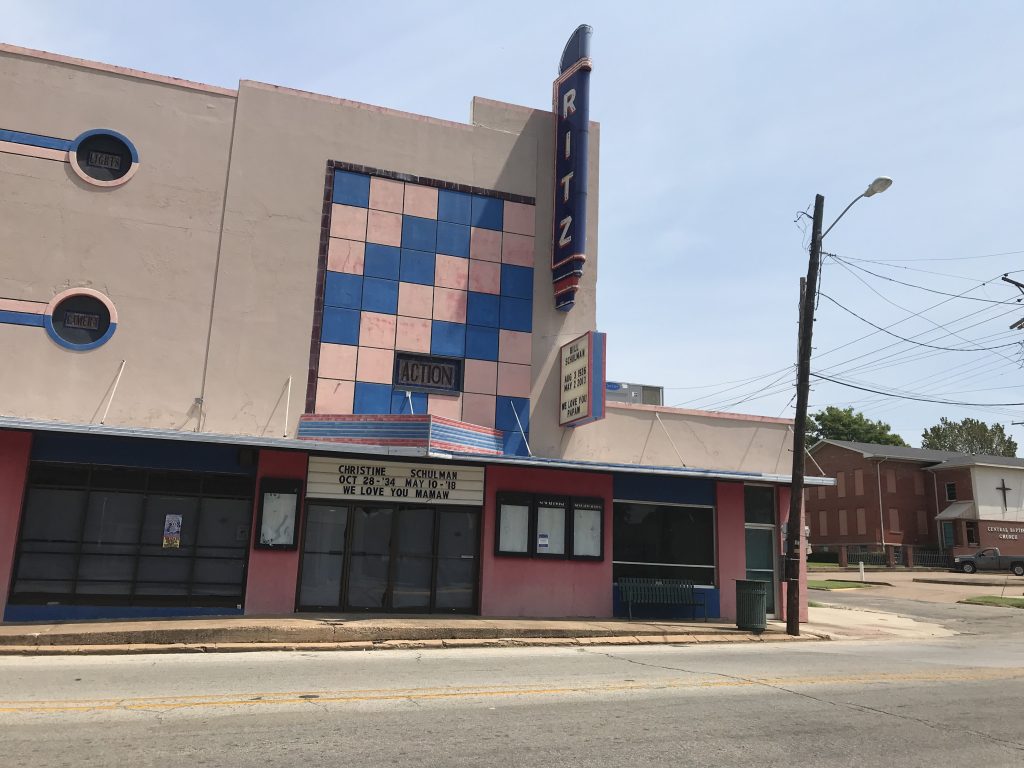 Destination, The Texas State Railroad station near Palestine. We didn’t take the ride, but we did a few years ago. In the open air cars, it gets pretty darn hot. Luckily, they hand out lots of free bottles of chilly water during the trip to Rusk and back. 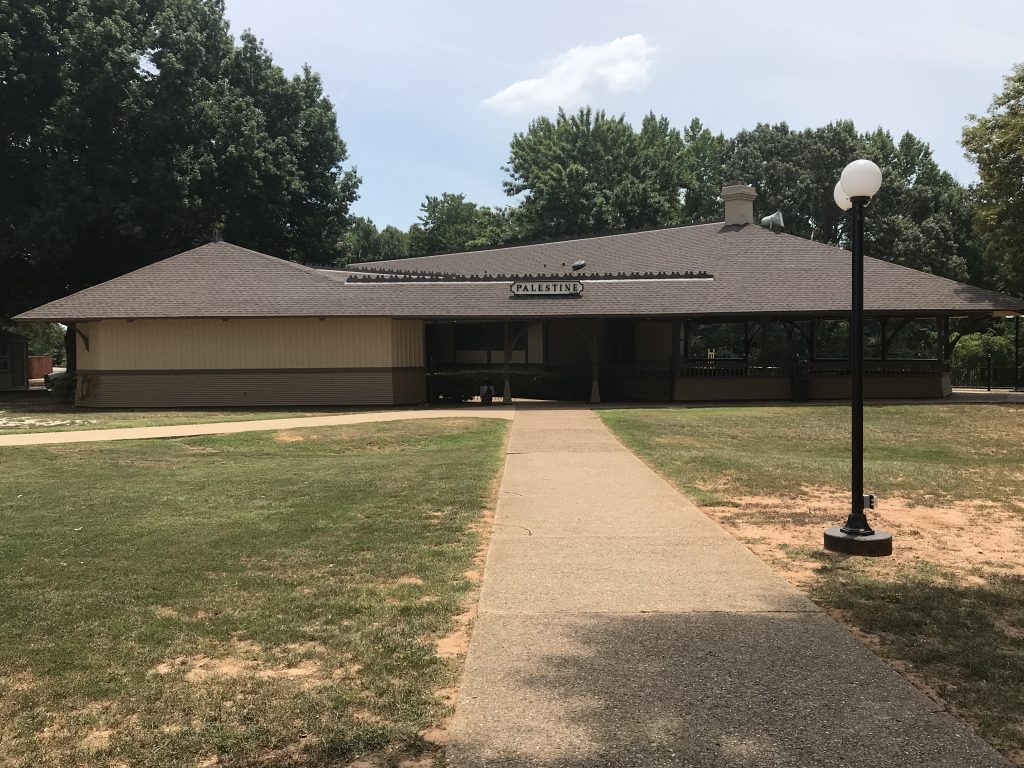 Here is a not so old diesel locomotive they have on one of the side tracks. 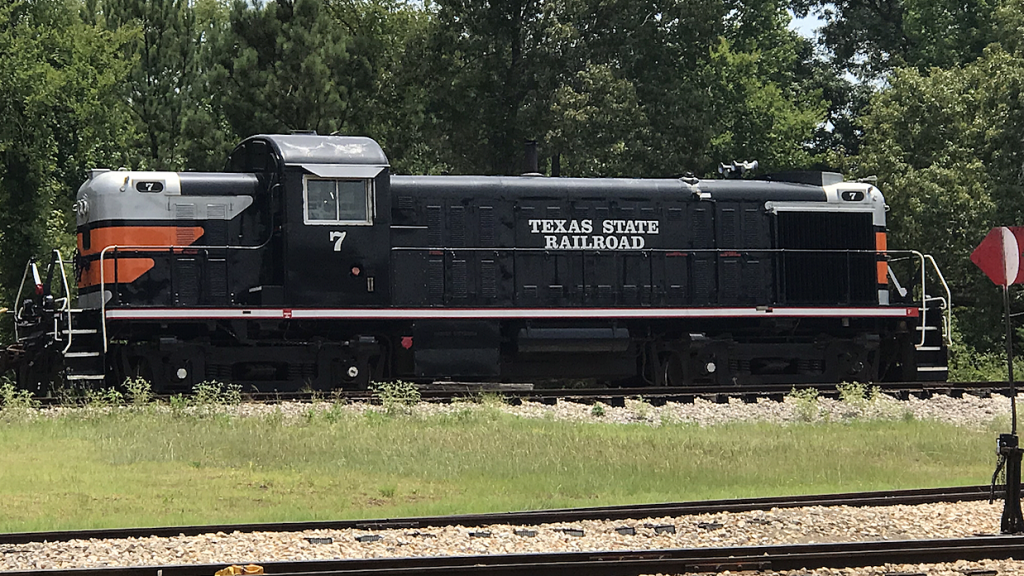 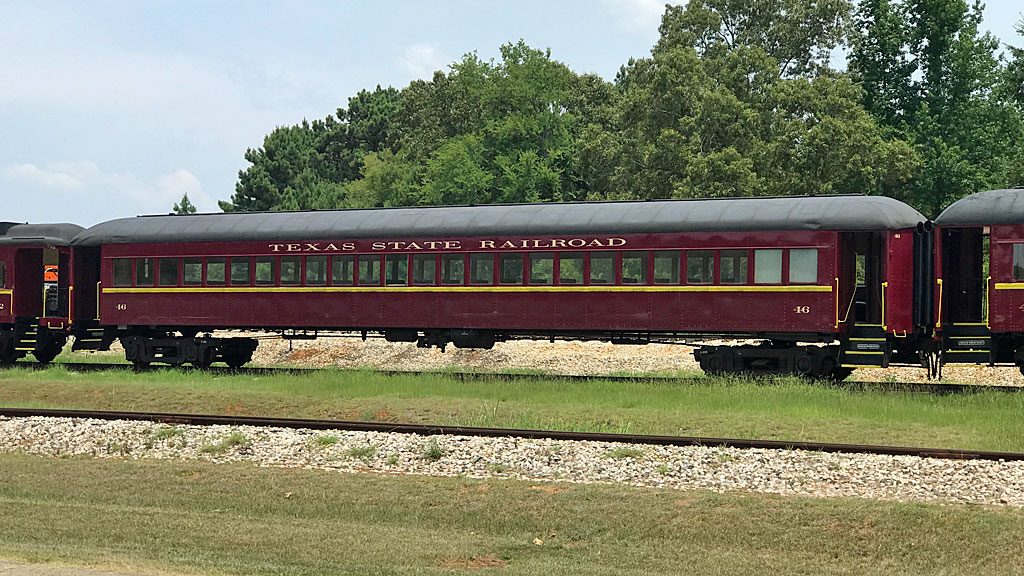 And finally, next to the locomotive above are three open air passenger cars.

[1] To avoid confusion, Texans pronounce this as “Palesteen”.